Charles Dean O'Banion was an Irish-American mobster who was the main rival of Johnny Torrio and Al Capone during the brutal Chicago bootlegging wars of the 1920s.

Those who first met Dion O'Banion in his flower shop or on the streets of his Near North Side stomping grounds found an amiable, good-natured young gentleman who would doff his hat to ladies and slap men on the back with a cheery, "Nice to meet ya', swell fellow!" (He habitually called strangers "swell fellows".) He would give to the poor without pause, he attended church on Sundays, abhorred prostitution and never hesitated to roll up his shirtsleeves to help where help was needed among his neighborhood. He never drank, even though he peddled the best beer in town.

O'Banion was born to Irish Catholic parents in Aurora, Illinois. He spent his early boyhood in the small town of Maroa in southern Illinois before moving to Chicago in 1901 with his father and brother after his mother's death (a sister, Ruth, remained in Maroa). The family settled in Kilgubbin, a once heavily Irish area on the North Side of Chicago that was notorious citywide for its crime; it was known as "Little Hell".

"Deanie", as he became known, sang in the church choir at Holy Name Cathedral as a youngster. However, neither music nor religion held interest for him; instead it was the street life of Kilgubbin that caught his eye. He and his friends (Hymie Weiss, Vincent Drucci, and George "Bugs" Moran) joined the Market Street Gang, which specialized in theft and robbery for the black market; they later became "sluggers" who beat newsstand owners who didn't sell the paper they were pushing. They started out working for the Chicago Tribune, but switched to the rival Chicago Examiner after a more attractive offer from mob boss Moses Annenberg. Through Annenberg, the group met safecracker Charles Reiser, who taught them his trade; in 1909 O'Banion was nabbed for safecracking, and a short time later was picked up on assault charges. These would be the only times he would ever spend in a correctional institution.

O'Banion wowed patrons with his beautiful Irish tenor voice at McGovern's Liberty Inn, where he worked as a singing waiter; later, he and his pals would rob drunken customers of their wallets and mug others outside. The boys then met the political bosses of the 42nd and 43rd wards through Annenberg; their job was to help steer the outcome of elections through violence. 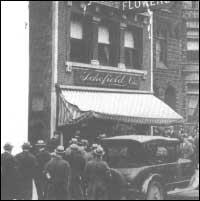 With the advent of the Prohibition in 1920, O'Banion made arrangements for beer suppliers in Canada to start shipments immediately, and struck deals with whiskey and gin distributors as well. He originated liquor hijacking, performing Chicago's first on 19 December 1921. He and the "lads of Kilgubbin" quickly eliminated all their competition so that the O'Banion mob ruled the North Side and the Gold Coast, the wealthy area of Chicago situated on the northern lakefront. As O'Banion's name grew in the underworld, he attracted even more followers including Samuel Morton, Louis Alterie, and Dan McCarthy. However, he also made enemies along with friends; two of these foes were Johnny Torrio, the head of the predominantly Italian South Side mob, and his lieutenant, Al Capone. The Torrio faction, which coveted the Gold Coast, compromised with O'Banion, agreeing to a sharing of profits in breweries and casinos and the North Siders becoming part of a huge Chicagoland bootlegging combine. However, O'Banion continued lifting South Side freight, angering Torrio and Al Capone.

O'Banion married Viola Kaniff in 1921, and bought an interest in William Schofield's Flower Shop on North State Street as a legitimate front and an outlet for his fondness for flowers. Schofield's became the florist for mob funerals. The flower shop happened to be across the street from the Holy Name Cathedral, Chicago where he and friend Hymie Weiss attended Mass. The rooms above Schofield's were used as a headquarters by the gang.

In February 1924, O'Banion sought to one-up his South Side rivals by framing Torrio and Capone for the murder of North Side hanger-on John Duffy. Despite their enmity, he did lend a hand to Torrio and Capone when they attempted to influence the results of the mayoral election of Cicero on 1 April by supplying some of his own thugs for their use. In return for the use of his men, Torrio allotted him some of Cicero's beer rights and a quarter-interest in a casino called The Ship. O'Banion then cheated Torrio by moving some Cicero speakeasies into his North Side territory, thus increasing his own profits. When Capone protested, Torrio attempted to convince O'Banion to abandon his plan in exchange for some South Side brothel proceeds. O'Banion angrily refused, as he abhorred prostitution.

In May, O'Banion tricked Torrio into thinking he was leaving organized crime and so set him up for a police raid on the Sieben Brewery on North Larabee Street while "The Fox" was attempting to buy it from O'Banion. Meanwhile, the Genna Brothers, who controlled Little Italy west of The Loop (Chicago's downtown region), began marketing their whiskey in the North Side. When O'Banion complained to Torrio, Torrio did nothing. O'Banion made the tension between himself and the Gennas worse on 3 November by insisting that one of the Genna siblings, Angelo, pay in full the $30,000 debt he owed to The Ship. Following this incident, the South Side hoods and the Gennas (who were allied) passed a unanimous vote to kill O'Banion.

Deanie was hard at work in Schofield's back room, clipping chrysanthemums, rushing to get ahead of an order backlog. He was tired this morning for some reason; needed a break; he glanced at his watch -- 11:30 -- just as he heard the transom bells over the street door jingle. On his way out front to greet the customers, Deanie nodded at porter Bill Churchfield heading the other way, carrying a broom and dustpan, having just swept up. In his left hand, Deanie still held his pair of clipping shears as he rounded the corridor into the showroom. He instantly recognized one of the three men who had entered; the short, stout man in the middle of two strangers was Frankie Yale.

"Are you from Mike Merlo's?" he asked, holding out his right hand to Yale. Then, Deanie must have known something was wrong. In a flash, he knew it. It was the way Yale took his hand. His grip was extraordinary and he clutched on as if he would never let go. If the victim may have seen the other men, the strangers, draw their guns, there was nothing he could do. Yale clenched tighter and Deanie winced. The strangers fired: two bullets into his chest, two in his throat, and another blew his jaw away. When Yale released his hold, the bloody thing that was Dion O'Banion fell like fodder against the glass display case, then slipped to the floor. It was probably Yale who administered the colpo de grazia (kiss of death) into Deanie's once blushing cheeks. This O'Banion would never crack wise against the Sicilians again.

Had Deanie recognized the two men accompanying Yale, he would not have been caught unawares, for they were the most brutal assassins in the syndicate, John Scalise and Albert Anselmi. Together with Yale, they careened from the shop toward Superior Street where they jumped into a dark blue Jewett, driven by Mike Genna. Turning left at Dearborn, the next street over, the car disappeared into history. 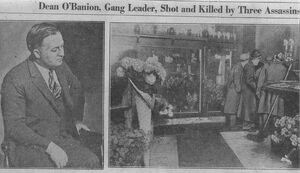 Retrieved from "https://gangster.fandom.com/wiki/Dion_O%27Banion?oldid=4163"
Community content is available under CC-BY-SA unless otherwise noted.