Earl "Hymie" Weiss was a Chicago mobster and tough rival of Al Capone. Weiss was born in Chicago to a Polish Catholic emigrant family as Earl Wojciechowski, the family having changed their last name upon immigrating to the United States in the 1890s (he earned the nickname "Hymie" only later in his career).

Hymie Weiss began engaging in petty crime in his teens before ultimately befriending Chicago mobster Dion O'Banion. It was through O'Banion that Weiss was to meet Bugs Moran The North Siders had frequent confrontations with Johnny Torrio and the Genna Brothers, which eventually led to the assassination of O'Banion in 1924 by Frankie Yale, Albert Anselmi, John Scalise and Mike Genna, who represented his brothers, in order of Torrio and the Genna's.

The North Siders were enraged about the murder and took their revenge. 1925 was a year where the North Siders would be victorious. First Hymie Weiss, Bugs Moran and Vincent Drucci ambushed their powerfull enemy Johnny Torrio in front of his house on January 24, 1925. Although Torrio survived the attack, he was shakin' and left his business to Al Capone. Torrio then returned to his native Italy after a slow and long recovery of his wounds (but later returned to New York and became an important advisor to Lucky Luciano and others). Then they attacked their other enemies, the Genna's. The first victim was Angelo Genna, the leader of the gang. He was murdered after a high speed chase in May, 1925. Not much langer his brothers wanted to take revenge for Angelo's death. Mike Genna ambushed Drucci and Bugs Moran but only wounded the men. Soon the police came to the scene, chased Mike Genna and also shot him death. The North Siders had now killed a couple of their biggest enemies and gave their organisations serious setbacks. But they wouldn't stop there. In July, 1925, a third Genna brother, Tony, was murdered in pretty much the same way as Dion O'Bannion. The 3 other Genna brothers fled Chicago sometime later and left their businesses.

Hymie ultimately proved himself one of Capone's most dangerous enemies (rumored to have been the only man Big Al was truly afraid of). On September 20, 1926, Weiss led a group of sedans past Capone's headquarters, the Hawthorne Hotel in Cicero. The North Siders raked the entire block with submachine gun fire in an attempt to wipe out Capone. One of the cars stopped, and a man in brown overalls got out (said to be Peter Gusenberg) and emptied his tommy gun into the cafe where Capone was cowering. Capone was unharmed but there was allot of damage and he was in serious danger. Capone first wanted a truce with the North Siders but Hymie wouldn't have anything of that. So Capone made his move.

On October 11, 1926, Weiss was crossing State Street with four of his men to enter his headquarters, when two gunmen suddenly sprayed them with buckshot and submachine gun bullets from a nearby second-story window. Hymie and one of his men were instantly killed, the others wounded. Bullets from the fusillade sprayed and slightly damaged the cornerstone of the Holy Name Cathedral, Chicago directly across the street (the bullet wholes aren't visible today, but you can see there's a new layer of cement above it). The 28-year old gang boss was said to have left a fortune of $1.8 million dollars. Following his death, Weiss was buried at Mount Carmel Cemetery in the Chicago suburb of Hillside, Illinois. Vincent Drucci took over as head of the North Siders.

Weiss was said to have suffered from arterial cancer, which often gave him blinding headaches, dizziness, and fainting spells. Because of his illness, Hymie often said "I don't expect to live long, but I expect to live long enough.", which may explain his fearlessness while fighting Al Capone. It is also believed that Hymie Weiss was the first to use the infamous words 'Lets take him for a ride' when they were planning a hit on somebody. 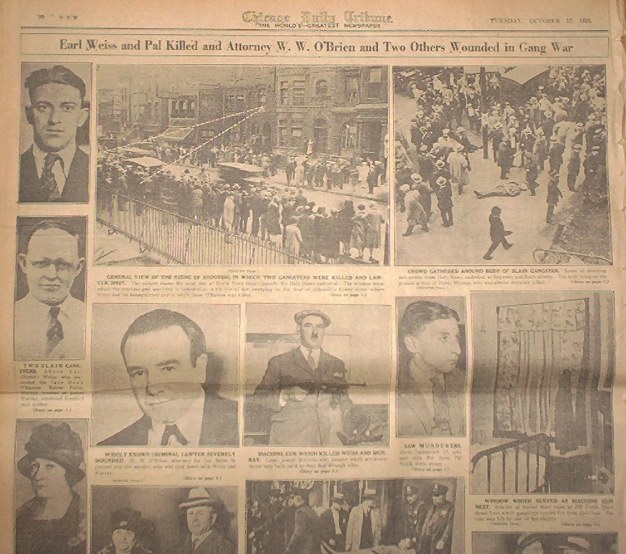 Retrieved from "https://gangster.fandom.com/wiki/Hymie_Weiss?oldid=4165"
Community content is available under CC-BY-SA unless otherwise noted.