Peter Gusenberg (also known as Goosey) and his brother Frank were German-American contract killers and members of Chicago's North Side Gang, the main rival to the Chicago Outfit.

Pete Gusenberg and his brother Frank Gusenberg grew up tough on the North Side of Chicago. After graduating from petty crime into more serious offenses, they teamed up with Dion O'Banion, Hymie Weiss, and other members of the local mob scene. Pete was sent away to United States Penitentiary, Leavenworth for a mail robbery in the early 1920's.

Prohibition & the North Side GangEdit

Released in 1926, he learned that O'Banion had been killed by gangsters working for Al Capone. Joining his friends, led by Hymie Weiss, Gusenberg participated in the garguantous drive-by shooting the North Side performed on Capone's Cicero, Illinois headquarters, the Hawthorne Hotel, riddling it with thousands of bullets on September 20, 1926. According to many accounts, the second to last car stopped in front of the hotel restaurant where Capone was cowering and Pete Gusenberg emerged, clad in a khaki Army shirt, brown overalls, and carrying a Thompson submachine gun fitted with a 100-round capacity drum. Kneeling in front of the doorway, Gusenberg emptied the entire drum into the restaurant, and then casually strolled back to his car, which then sped off to safety.

Despite the adaucity of the attack, Capone was only more infuriated. Hymie Weiss was murdered three weeks later, and over the next couple years, the North Side Gang continued to weaken. The North Siders especially wished to kill Jack McGurn, as he was rumored to have been the machine-gunner who killed Weiss. On at least two occasions, the Gusenberg brothers tried to kill McGurn. Despite wounding him several times, Jack survived the attempts on his life. By late 1928, the leader of the North Side Gang, Bugs Moran, struck an alliance with Al Capone's rival Joe Aiello. The latter, assisted by the Gusenberg brothers, killed Pasqualino Lolordo, president of the Unione Siciliane. It was from this murder that the plot to get rid of Bugs Moran sprang. 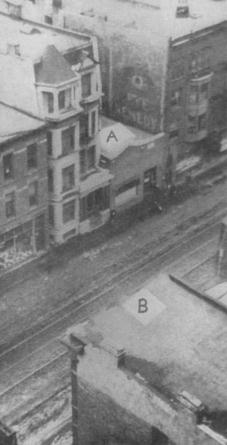 On February 14, 1929, the upper echelon of the North Side gang gathered in their main booze garage, the S.M.C. Cartage Company at 2122 N. Clark Street. Inside were Pete and Frank Gusenberg, Albert Weinshank, Adam Heyer, James Clark, John May, and Reinhardt Schwimmer. The usual story has these men waiting for a shipment of hijacked whiskey from Detroit, but this has been disputed. At any rate, at least four men entered the garage, with two in police uniform. After lining the North Siders up against the north wall, the "cops" cut loose with submachine guns and shotguns, killing all seven men, in what would become known as the St. Valentine's Day Massacre. Although the killers (widely believed to have been members of a St. Louis-based gang called Egan's Rats), wiped out Bugs Moran's mob, they missed the man himself.

Retrieved from "https://gangster.fandom.com/wiki/Peter_Gusenberg?oldid=4292"
Community content is available under CC-BY-SA unless otherwise noted.